Happy Sunday evening, everyone! I hope you all have had a great weekend.

Two weekends ago I went on a little treasure hunt at a local junk/antique store and I haven’t had the chance to share my finds with all of you yet…or I guess it’s more appropriate that I call them “picks” because Picks is the name of the store!

My mom has stopped in to visit them a few times and always told me that I needed to go take a look but I hadn’t had the chance yet. I happened to drive by the weekend of October 7th and 8th when they were last open when I was on my way to the dog Park with Luna. I noticed all of the people heading into the shop and how busy the parking lot looked so I promised myself I would stop in for a quick peek on my way home…

A quick peek turned into an hour browse through the store and the purchase of 3 items….oops 🙂 The store is truly FILLED with treasures and lots of great vintage pieces: everything from small home decor pieces and collector’s items to large pieces of furniture or art. I was amazed at how much they could fit in the space that they have and I had to stop myself from buying more than what I eventually left with.

I had been searching for a bench or some type of seating for my bedroom to have a place for Luna to lay as well as somewhere I could sit to put my shoes on in the morning. My search came to a end when I found this perfect large coffee table that was meant to be for me as it was already painted the identical color of my accent wall in my bedroom: one less project for me! As I pictured, Luna spends some time laying up there since it’s at the foot of the bed and I am hoping to either make (I struggle in the sewing/seamstress department) or buy a seat cushion to put on top in another color from my bedspread.

*Side note: the fun tasseled rope hanging above my headboard is a new edition. Luna decided to rip all of the tassels off of one of my accent pillows one day while I was at work so I salvaged them all by hot gluing them to a piece of white string garland and then hanging it on the wall with clear tiny command hooks 🙂

My two other scores at Picks were a coat rack and a red-bordered chalk board. I don’t have a front coat closet at my townhouse so as we are getting closer to winter and coat season I had been looking for a coat tree to put at my front door. It was a great price and is a nice dark brown wood but I think I’m going to put some paint on it so I don’t have a photo of the finished project yet!

The chalkboard stuck out to me because I have been looking for something else primary colored to hang in my kitchen to keep with my current theme. I thought a chalkboard would be perfect because I can change it anytime I want something different. I hung it right above my great coffee/bar cart that I snagged at the Junk Market in Fargo and put it right next to me favorite sarcastic coffee sign. “Today is a good day for a good day” is a phrase I heard Chip and Joanna Gaines use on an episode of Fixer Upper last season and it has stuck with me since….what a great way to approach life. I figured it would be the perfect thing to look at as I’m brewing my coffee in the morning and just about to head out the door.

Picks is located on South Washington, in the same strip mall as Mexican Village and TJs Sports bar (right at the intersection of Washington and 13th Ave S). They are open twice monthly for 3-4 day stretches and the hours each day they are open are 10am – 6pm. Their prices are extremely reasonable and I was pleasantly surprised to look at the price tags in comparison to some of the other junk boutiques I’ve been in where the prices seem a little bit steep. My chalkboard was 12 dollars, the coat rack was 28, and the beautifully painted coffee table was only 45!

They were just open again this weekend so sorry if you missed it! You can looked forward to November 2nd through 5th which is their next weekend open!!! Make sure when you stop in to shop that you grab a calendar from them that highlights when they will be open for the rest of the year

Thanks for reading everyone! Have a fantastic week!!

Since we are already almost a week into October (yikes!!) this past weekend I made it my mission to get my Halloween decorating done. Since this is my first year living in a place with a front yard that I could decorate I was excited to find some simple, inexpensive decorations!

A few weeks ago when I was at Target I took my time at the front door and looked through the dollar/saver spot section. It is ALWAYS a goldmine, especially around the holidays because they have some great decor items for 5 dollars or less!! This time around didn’t disappoint….I scored both of these ceramic (light up!) pumpkin lanterns for 3 dollars a piece. They have on-off switches you can turn on to make the multi-colored lights change and light them up. I got this “wicked” sign and the Happy Halloween sign in the back of the photo as well. I was able to get all 4 things for less than 15 dollars and they are simple things to set up either outside or inside.

Of course when you’re decorating for Halloween pumpkins are a required part of the equation. I am not a very skilled pumpkin carver so I decided that I wanted to purchase craft pumpkins instead so I could decorate them and have them for at least a few years. I also will be able to decorate them in different ways each year if I want to so I figured it would be worth it to spend the extra money! Michael’s was having a sale this past week (through October 1st) and they had 50% off ALL of their craft pumpkins so that’s where I chose to buy mine.

As I mentioned, the craft pumpkins are a little more on the expensive side, but by getting them during the half off sale I was able to get one larger size pumpkin for 10 dollars and then 2 smaller sized ones for 8 dollars each. I decided to get my smaller pumpkins in white because I thought they were something different and they might make my designs stand out better!

The first pumpkin I decorated was inspired by an idea I saw in HGTV Magazine’s October issue. They used metallic, simple push pins in colored craft pumpkins to make lots of fun designs (spiderwebs, words, a witch’s hat, etc.). When I was at Target I bought some black, white, and gold circular push pins as well as some flat silver/metallic ones. I figured I couldn’t go wrong with writing the word “BOO!” for Halloween and I chose to use a white pumpkin. It was so easy to put the push pins into the craft pumpkins! Here’s how it turned out: 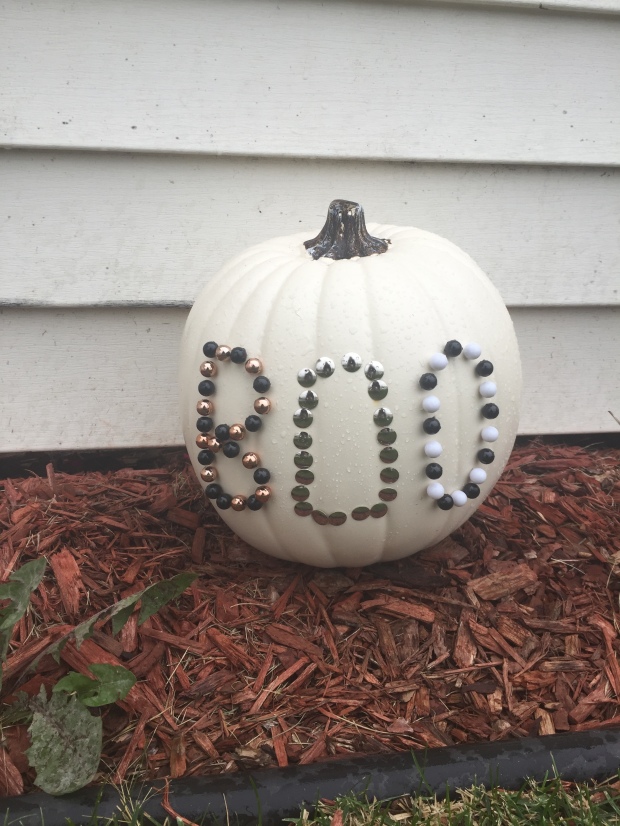 On the larger pumpkin which was orange I bought some vase fillers at Michaels that were purple and black with silver spiderweb details on them. Vase fillers are always so inexpensive but they can be used for so many different projects!!! I armed myself with my hot glue gun and attached the lightweight vase filler spheres to the pumpkin one at a time. I put a “31” on this pumpkin and I drew the numbers lightly with pencil before I started gluing so I was sure I made them even and was able to keep everything lined up. Hot glue holds extremely well so I think it will hold up even with my pumpkins being set up outside.

For my last pumpkin I used some other simple finds from the craft store and Target. I picked up a package of Halloween string garland from the dollar section at Target that had 3 separate sets (one orange, one white, and one black. I used the black garland since it was on the white pumpkin and just hot glued the string in sections as I wrapped it around the pumpkin. At Michaels I found these awesome glittered and colored spiders in a pack of 6 and thought the purple, green, and orange colors made them stand out. I hot glued the legs of the spiders onto the garland string in some spots and it probably took me less than 5 minutes to get the whole pumpkin decorated! It might be my favorite of the 3 🙂 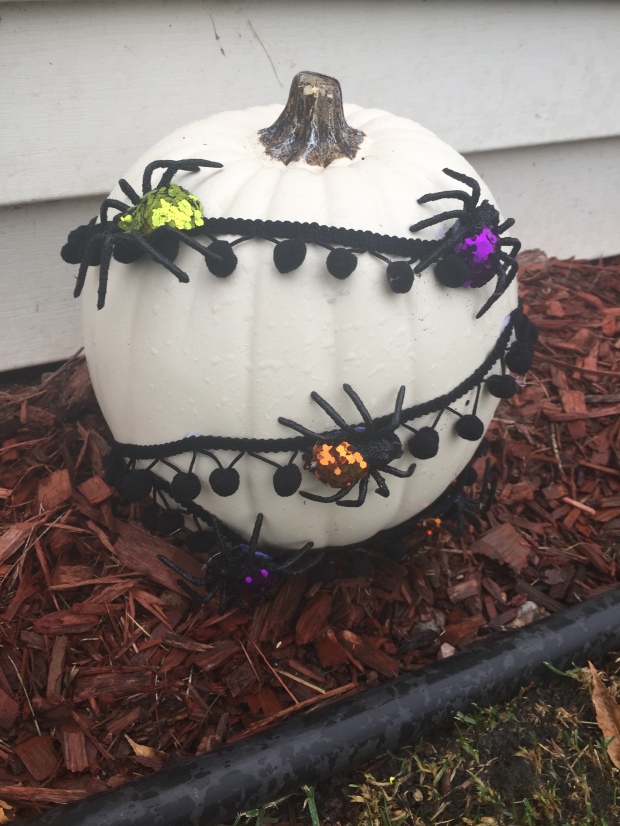 I hope you all are enjoying our transition into fall weather and celebrating by drinking hot chocolate/cider, breaking out your boots/scarves/sweaters, and watching LOTS of football because I know I am!

Have a great rest of the week!

Thanks so much for stopping by! I’m so glad you’re here. It’s nice to meet you (or see you again if you’re back for more)

Please take a look around the site! A good place to get started and learn a little bit more about me is by following the ” ABOUT ” section at the top of the site

Any comments, questions, suggestions, or collaborations please use my contact form by click ” CONTACT ” at the top of the site and I will get back to you ASAP!